Posted by Ryan Moore on May 01, 2014
The Motorola Moto X... probably the most underrated phone of its time.

Plagued by a lot of misinformation and tech-snobbery with the "lower than flagship specs".

The Moto G helped fuel that 'up-turned nosery' by releasing an even lower spec'd phone.

Personally I loved both phones.  (Moto X review, Moto G review)  And I think that there were a lot of folks out there who really missed the point on the purpose of these devices. 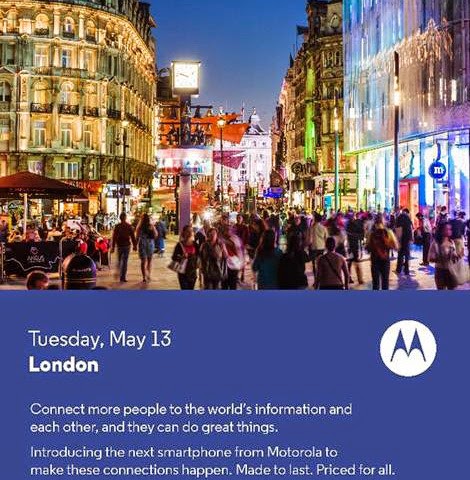 What else do they have in store?  I really hope they follow along the same lines and try to showcase to everybody that 'bigger isn't better'.  Having the biggest number in front of the GHz number doesn't always make for a good experience.

Well, we'll find out on May 13th as they're holding an event in London.

We'll all have to be patient

One thing I'm hoping for is for them to really help squash any fears folks have about +Lenovo being at the helm.  I really believe it when +Dennis Woodside had mentioned that the Moto branding came out without the help of Google, and they really worked autonomously ... and that when Lenovo took over it was going to be the same.  But maybe I'm just being optimistic.
event lenovo London motorola