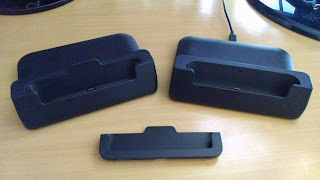 It's no secret by now, I'm addicted to eBay. It has become my #1 stop for shopping for Android accessories, especially cheap charging docks for all my various phones and tablets.
This time around I'm doing a small review on docks for the Nexus 7.

I Bought this dock the same time I bought my Nexus 7 (2013) and luckily they both showed up on the same day. The dock is china brand mainly seen on eBay called RNO Power Solutions.

It's sold specifically for the Nexus 7 (2013) model and has a removable plate seen on the top picture that allows the Nexus 7 (2013) fit with or without a TPU rubber case on. Another interesting thing I noticed, by removing this plate, last years Nexus 7 fits perfectly as well. 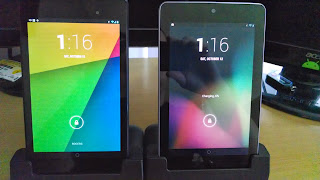 The Classic Nexus 7 fits like a glove with the plate removed, however there's no option to use it with a case on like the (2013) model. Not sure if they planned it this way, but either way it's pretty awesome I can dock both my tablets at the same time.

The RNO dock comes with its removable plate, AC pack, and 2 Micro USB Cables. Only 1 cable is required to be used on the dock, but for some reason they threw an extra cable in the box. Though I don't understand why, I'm not about to argue with them over that.

If you want to grab this RNO dock for your Nexus 7, you can find the eBay Link Here.
It sells for roughly $35 after tax and shipping, but in my mind it's totally worth it.
Because this is eBay we're talking about, I can't say this is the cheapest price as there's always new ads being posted, but this is the one I bought personally.

Hope you guys enjoy the dock as much as I do.