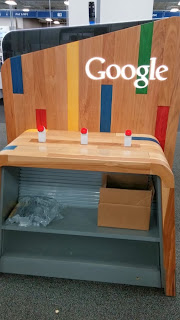 Bestbuy showing a little love for the Nexus 5


So a reader on Google+ posted this picture from a Bestbuy location near him the United States.
He claims a BestBuy Manager confirms this is going to be the official booth for the Nexus 5 that's being setup. The colors even have a little Nexus kinda flair to it.

Recent rumors around the internet are pointing for the Nexus 5 to be revealed Oct. 28th, which would also fit history. Granted this is the US and bringing the Nexus 5 to Canada took nearly an extra month for Google last year, but lets keep our fingers crossed that this year they can bring it to the Canadian market a little earlier this time around.