I'm not much of a gamer.  Sure, I was pretty addicted to Mario Bros back in the day, but who wasn't.

But my all time favourite game series is the Legacy of Kain.  Especially when you introduce Raziel.

So when a game comes out called "Reaper", I'm interested.  Add in the fact it was made by Hexage (the group that brought you Radiant Defense, Radiant and one of my guilty pleasures:  Robotek), I'm in. Reaper is a simple mix of RPG and side scrolling hack and slash.  Best of yet I can use my controller with it.

I started playing the game and liked it for it's simplicity.  Like Robotek there's an element of Final Fantasy, where you can walk to or pick your next target and fight baddies.  Robotek is more strategy/chance - whereas Reaper let's you hack and slash at that point.  That I like.

It's pretty simple, they give you some standard screen actions to perform with your finger to let you do the attacks.  Finding out I could use my Steelseries Free controller with it was the icing on the cake.

And my favourite, the whirlwind. 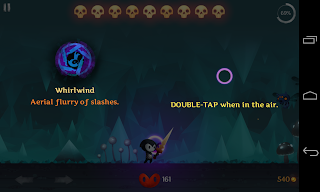 It gets a little hard to watch the whole screen, so luckily they have support for controllers.

I cannot tell you how much more 'awesomer' that makes the game.  Yes, I said awesomer, because it is that awesome.  Not only do I love the support for controllers, but it literally makes the game better and easier.

But it's not just hack and slash.  You move about on the map taking to characters, taking on 'quests'.  Which basically are just 'go hack and slash that area'.  Suits me just fine. 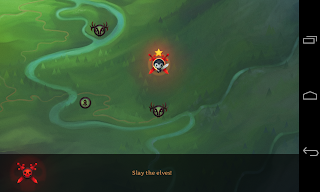 Pretty cool.  To top off the RPG feel you eventually get to some shops where you can buy weapons and armour etc...

You'll notice one of the shots has 'skills'.  As you advance in levels you get to pick one 'skill' to add in.  Faster, stronger, etc... 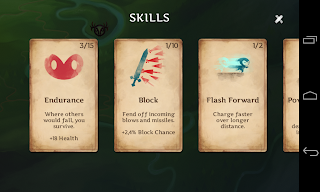 This is where paying for the full version comes in handy, so you're not just stymied at the level 10 cap.

Especially as the hack and slash parts get harder.  There's helicopters, and tanks and whatnot... seriously good fun as you try to learn the patterns to fight properly.  +Hexage (or +Hexage) did awesomely with this game

Here's my attempt at a video review