So, you have a fancy new phone and want to share your music with all your friends. How do you do that? With a speaker, of course! But looking around you see a ton of options. Some with docks, some with cables and some using bluetooth. Well, Sony feels like they have you covered with a whole line of speakers. We will be looking at Sony’s Bluetooth Wireless Mobile Speaker (SRS-BTV5).

This bluetooth speaker comes with all the usual affair. Support for Bluetooth 3.0 and all the profiles (A2DP/AVRCP/HSP/HFP). If you look closely, you will see HSP (Headset Profile) and HFP (Hands-free Profile). Yes, in addition to streaming all audio, the speaker can also double as a speaker phone with it’s own dedicated call button and mic. 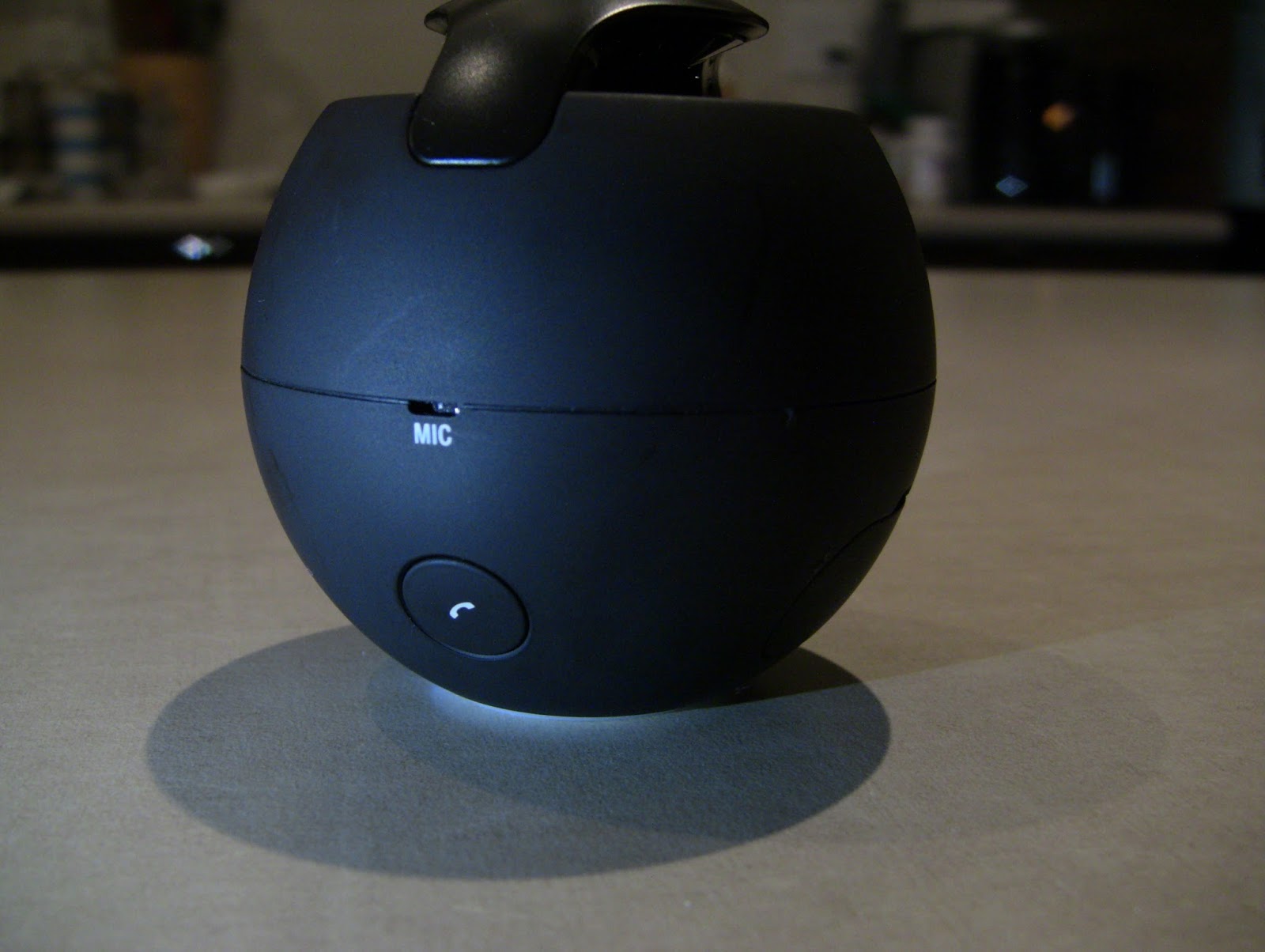 It also comes with the added touch of NFC-pairing. Much of the Sony accessories are taking advantage of NFC to allow for quick pairing to mobile devices, and it works as advertised. That being said, you can still use standard pairing if your device doesn't have NFC.

Sony has always been known for their design, and this device is no different. Portability is the key for this device and they nailed it. The device is small and round, think Billiard ball, and not too heavy. It is covered in a kind of matte plastic, which gives it a nice rubbery feel. I loved the material. Sony has also made it available in black, white and blue. It also comes with a bag, so you can carry it around with you. 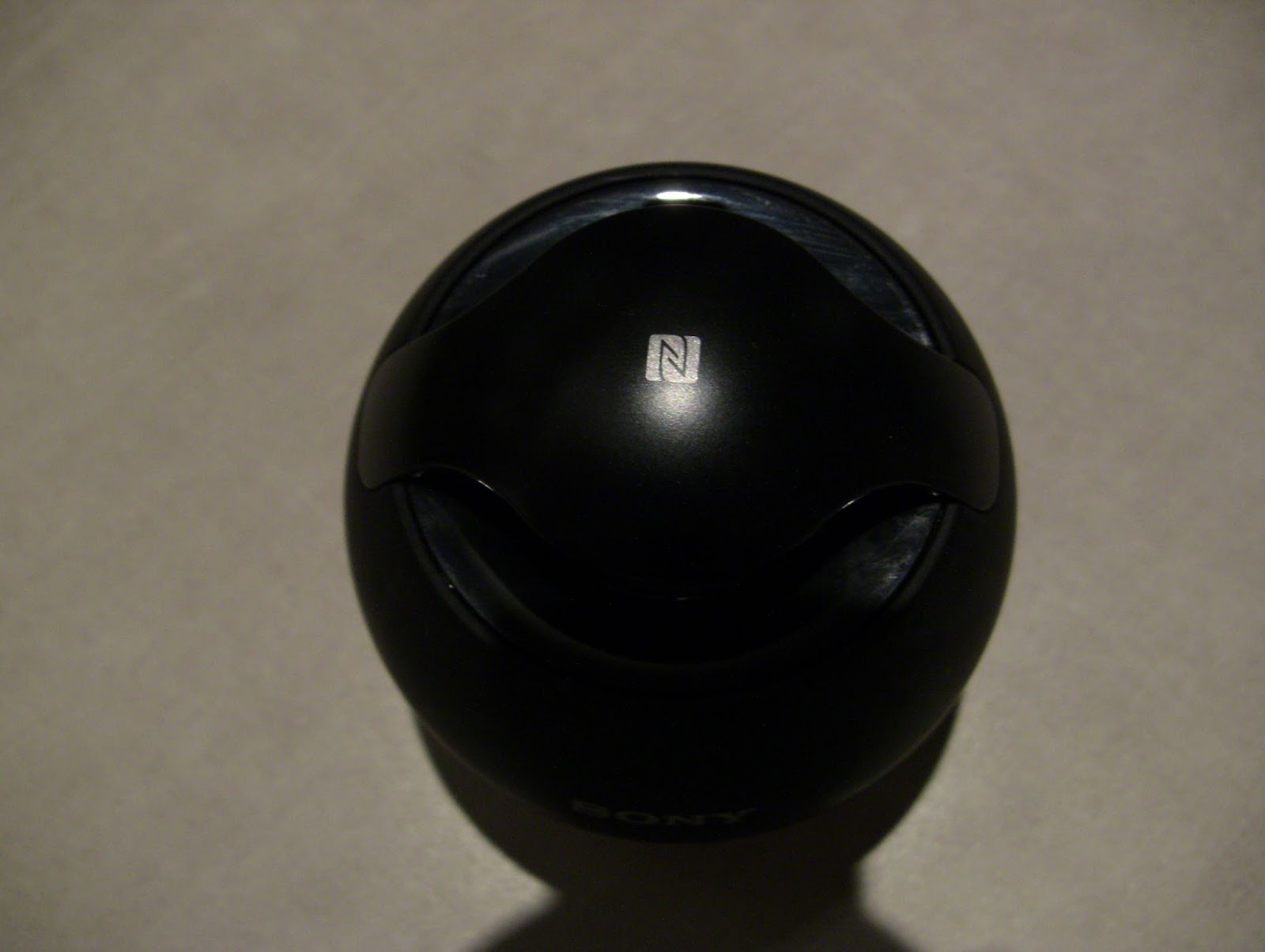 On the top of the device is the NFC chip and speaker. Since the speakers are round and cover the top, sounds travels in all directions. 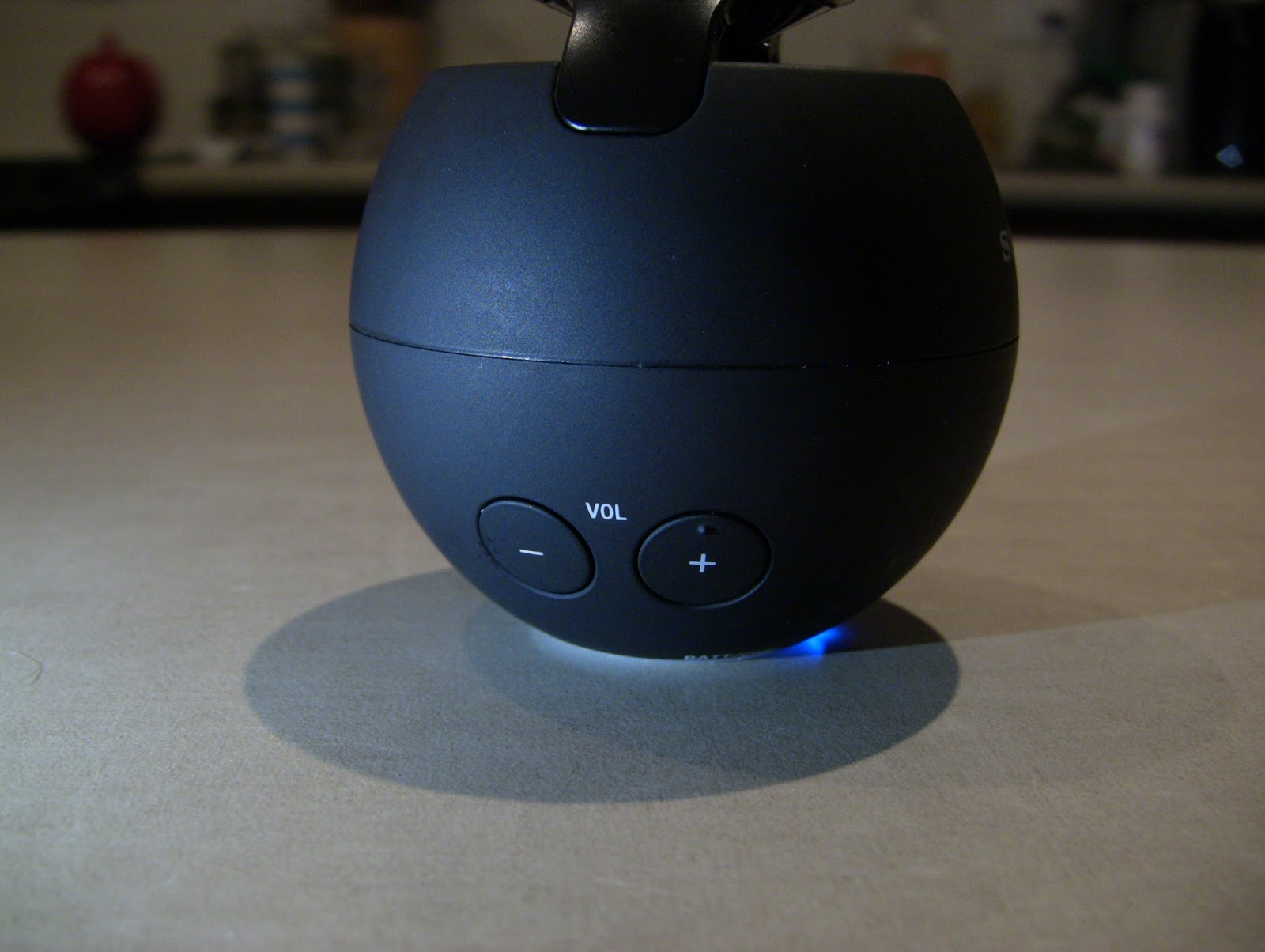 Along one side are the volume buttons which you can use to adjust the sound (we'll get to that later). On the other side is the mic and call/hang-up button. Just as you would expect, it works as advertised. 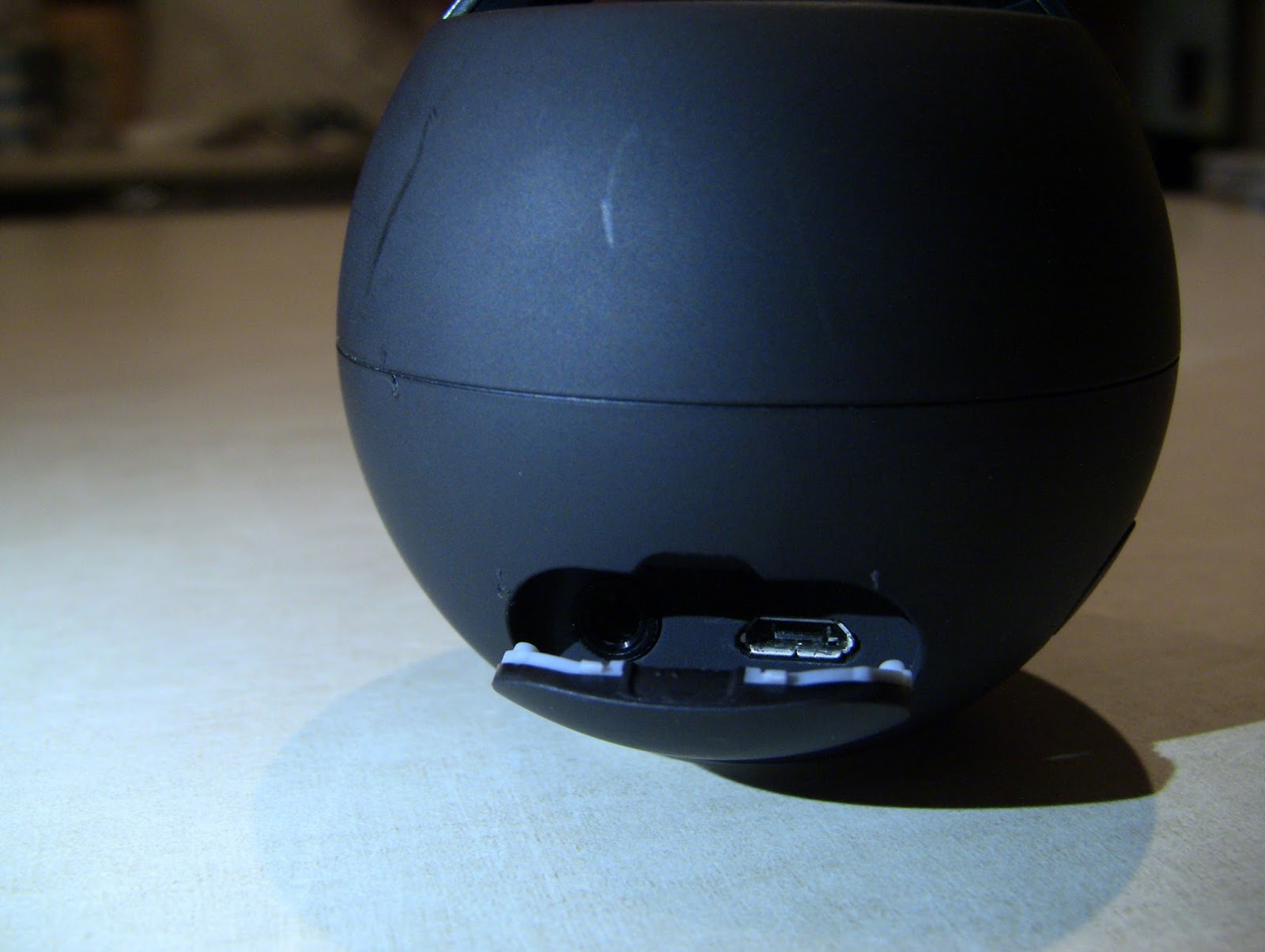 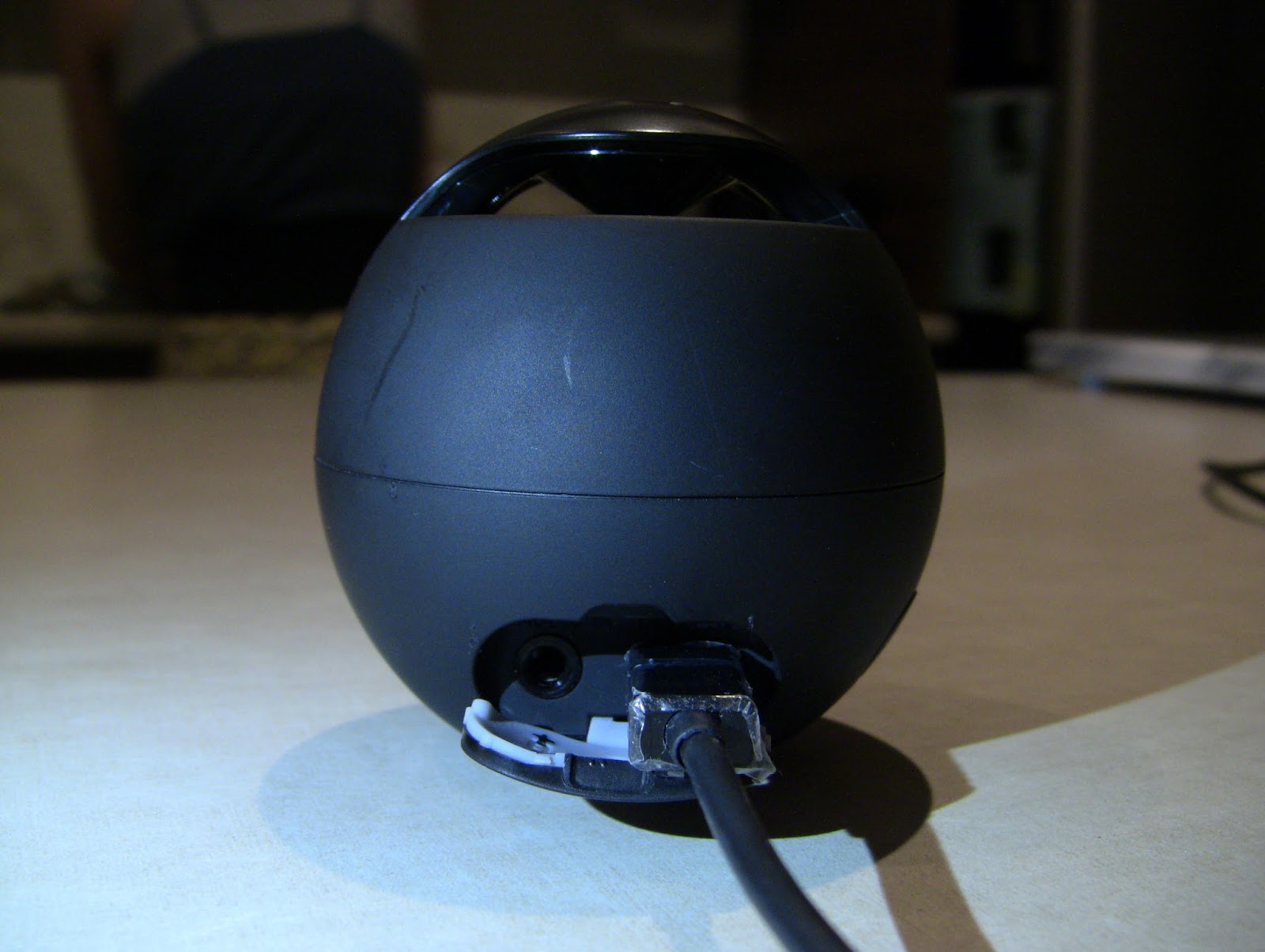 Between the two sets of buttons is a flap, which gives access to an audio-in jack (for those non-connected devices) and a micro-usb port for charging (yay!). It seems that, excluding their tablets, Sony may have finally kicked off the proprietary charging options for something more standard, and we couldn't be more happier. 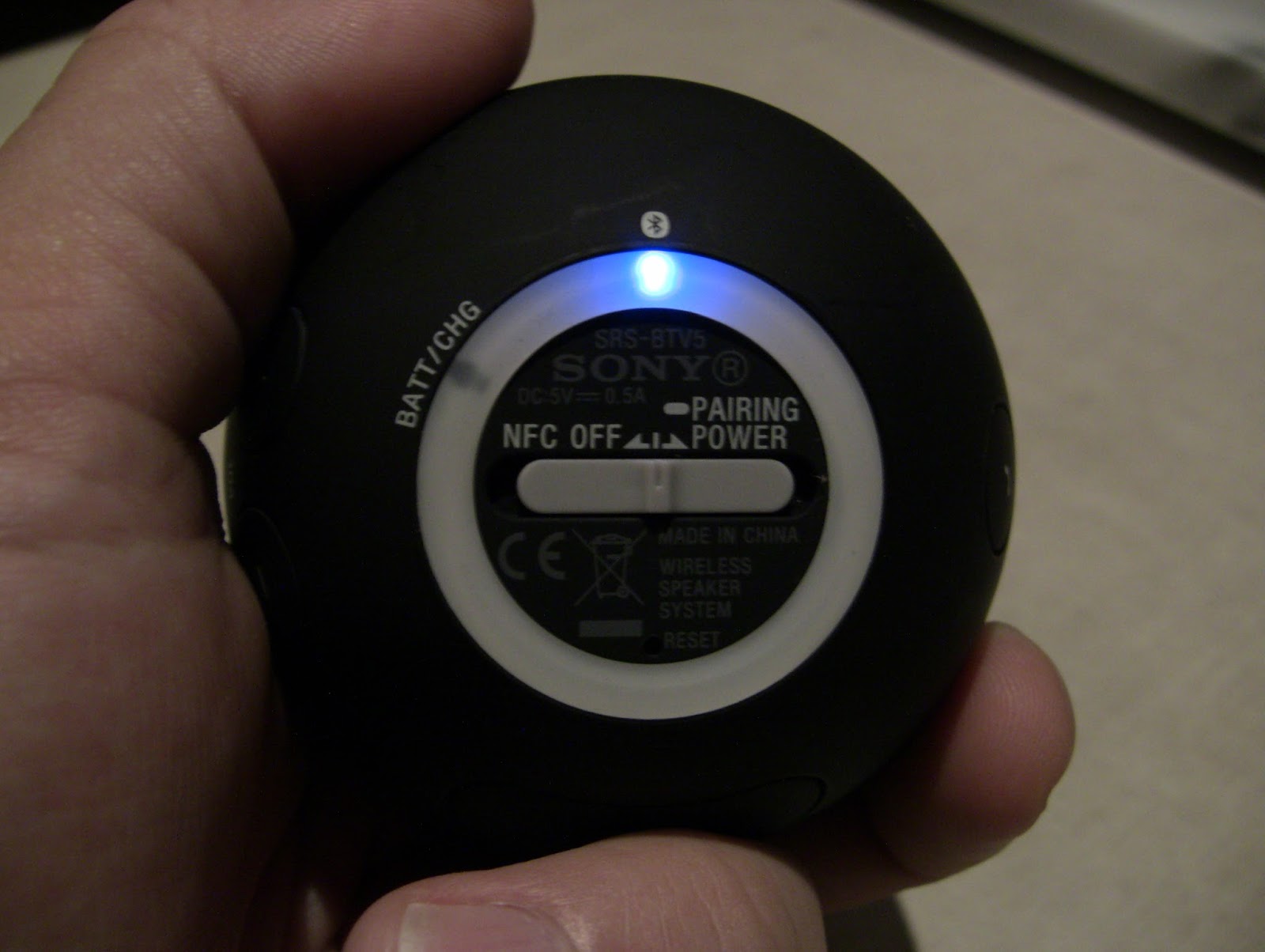 On the bottom of the device is the power and pairing switch. Slide to one side to turn in on and it will bounce back to the centre. When the light is on, you are ready to go. Pair simply by tapping the top of the device with your phone. If you want to pair a non-nfc device, you have to hold the power button for a longer period of time (until the light starts blinking faster). If the device is already on, sliding in the same direction will turn if off. I can not stress this enough. When you are not using the device, turn it off, otherwise you maybe surprised when you do want to use it and the battery is dead. Sliding in the opposite direction turns the NFC pairing off.

Battery life is listed as 5 hours of continuous use. This was about right in practice, so long as you remember to turn it off when you aren't using it, which is easier said than done in this growing wireless world.

Now for the important part, sound. The sound from this device can be described as adequate. For the size, it gave decent sound, but nothing earth shattering. Bass was non-existent but audio was quite clear. The volume was loud enough in an ambient environment, but start adding background noise and you start to lose it. Walk further away and you lose a ton of clarity. Racking up the volume to max just made things worse. The audio took on a tinney sound, common when the speakers are being pushed past their max, which forced you to bring the volume down. As a result, I would find it hard to recommend this to anyone for anything other than music our other audio in quiet enviroment, as long as they don’t mind the lack of bass.

What it comes down to is how you will use the device. There are two camps that may want this speaker, one for sharing, and the other for portability. I honestly think you should only get it if you fall into both of these. There are some pretty high quality speakers out there than can spit out good sound with great bass, they just aren't going to move around as easily. But if you are the type of person who takes their music everywhere and doesn't necessarily share, why aren't you using headphones?! If you want both, then this device is actually pretty good and the price tag isn't too bad. I complain a bit about the sound, but to be honest, it’s pretty good for a device this small and portable.

Currently you can pick them up at any Sony Store or online at Sony.ca for $79.99 (currently on sale for $69.99), but I did find them at Walmart for cheaper, so if you look around, you can probably find them at other places too.