Ryan's review of the HTC One 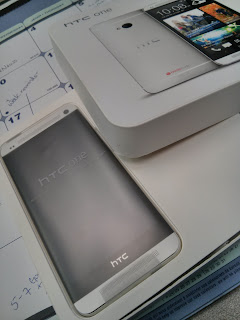 So, at the sake of sounding uberly fanboi-ish, and overly hyperbolic, I'm just going to say it.  Wow.

Just wow, this phone is IT.  It really is the best phone out there... imho.

Normally I get a phone to demo and I have it for a week at most and it goes back, this will almost be 2 weeks of me tinkering and playing.  Now it's not my daily driver mind you, but it's still something I played with every day trying to find out everything I can.

So far, nothing has unimpressed me.  There's some things that I'll miss, as I'm too used to 'stock'/Nexus, but it's just 'different' and not wrong.

But, let's dive in and see what we can see.  And I think there's one great hidden gem in all of it, that you never heard discussed much about it - but I really dig it.  Read on...

Writeup verison
First off, the specs:

Nothing disappointing here... well some might say "only 4MP", but we'll get to that later.

The outside:
The only way to describe it is 'svelte'.  It's nice, it really feels more like a piece of jewellery, like a fashionable watch than a phone.

The aluminum is great, although it does have faint scratch lines already - but it does make it feel solid.  Some may or may not like the back curve.

The buttons really do feel a part of the phone and not just 'slapped on' buttons.  The power button is its IR blaster (more on that later). 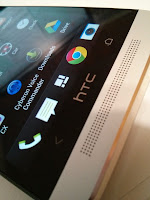 And you'll notice 2 great speakers on the front.  These are great speakers.  Sure, beats does make them sound better, but even off the quality is clear and the volume can be loud.  When I put on Ingress in my car and turned it on and put it on the seat, the sound of the lady's voice spooked me as I thought somebody was in the car with me.

Last but not least, only 2 capacitive buttons - it's odd to get used to.  No more swiping up for Google Now (now you have to hold Home), and no multi-task (you have to double tap Home).  It's just different... not wrong.

And there's Sense.  But as much as I said Sense 4 was not your Sense from the past, 5 comes in at even more 'slim' and sexy.

Blink Feed is there, but I already have Reader/Feedly, so I skip over it.  It's just a timeline of tweets, news and Facebook.

There's some standard widgets (although I find the lack of an email widget weird), and there's no power widget in the pull down tray like you'd expect (what you do find is a power saver button - that you can never get rid of).

Some of the apps are a little different.  Like Gallery - it imports your Facebook stuff in there... so it reads like a timeline.  But I dropped some videos from my youtube account in there - but I can't view them in there.  There's a lot to explore.

That's another thing -- in the Gallery app you can't see other video files.  I downloaded some MP4s from my YouTube account to watch later (like our Hangouts) - but I couldn't see them in the Gallery.  So I thought I'll just find the folder.  There's no default 'files' app in Sense.  So in order to watch other videos I had to download a file explorer, go to the folder and click ... weird.

Camera
This is where this really shines.  The comparison of dark shots to my Nexus 4... albeit not a trampling win, it's still a win.

Remember that this is just a 4MP camera.  So no super large enlargements, however what it lacks in 'quantity' (i.e. a large number of pixels) it makes up for in QUALITY.  The Ultra Pixel.  I wrote a post about it a while back.  Essentially a bigger pixel lets in more light = less grain and brighter pictures in lower light conditions.


Zoes are neat... novel ... not sure how I'll use them, but cool.  Just weird that outside of the phone the Zoe is just 20 JPGs...   You can share Zoes via their own share site (wish that they'd just make a mini MP4 or anigif of them... but ah well).
https://share.htc.com/Jj6bzOtW4#opening

The Gallery does allow you to sort by 'event' (i.e. if most were taken in a single location over a specific time span) and that's handy...

What was really good was how well it handled the panoramic shots.  Very smooth, clean stitching.

I'll miss spheres, but I didn't really use them all that much anyways.

(in case Minus screws up their widget again:  http://min.us/m9ZNJAvQlje4E)


Handling
I'm not much of a gamer, but to put the phone through some trials and tribulations, besides benchmarks I try out some heavy games.  And ... well, I kinda got addicted to Dungeon Hunter 4... only because it just handled it so well.

No matter what I threw at the phone, nothing caused it to slow down. 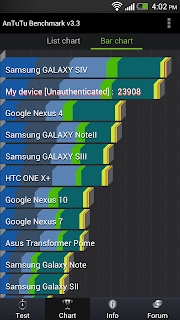 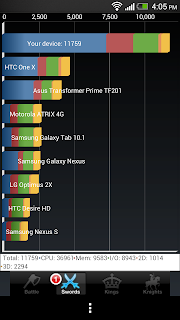 Battery
As it wasn't my daily driver, I can't speak per se about it having a full day of emails, texts, phone calls, etc... but when I would play intensive games I did notice less of a % drop than if I played the same game on the Nexus 4.  So you shouldn't have an issue there.

Overall
Literally I can't find anything wrong.  Sure I'm going to miss a few things:  Spheres, swiping up for Google Now, expanding notifications with just one finger...

But those are things I can live with... just get used to something different.  And the fact that in order to do somethings I might have to download a separate app (i.e. a better launcher, a file manager)... but that just reminds me that Sense is very light and doesn't overbloat.

I say most people would love this phone.  There's nothing that I can say is 'wrong' with it.  I mean I probably could, but that'd be just mean for being mean sake.

Hidden Gem
Yeah, there's something I only heard mention of before getting it but they didn't really talk about it -- and then getting it you go "WOW, now THAT is handy".

The IR port.  Sure, even my old Palm Pilots had them, but this brings it into the modern era.  Sure, it's only for TV stuff... but what's neat is you put in your Postal Code and your cable provider, answer some other questions about your set up and then blam, it downloads from the internet some of the 'popular' shows for you to watch - almost like the channel guide.  Tap something on now and it'll use the IR port to change your TV/cable box to watch it.  Tap something coming up and it'll make a reminder for you.

I couldn't get it quite to work as well as it probably could, but I really am kinda excited about it.  Very innovative.
htc one Review