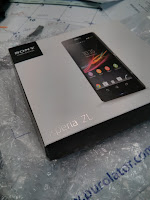 I love trying out new toys.  Definitely keeps me from buying them all the time.

This past week I've gotten to play with the Sony Xperia ZL, the model I got was running on Bell (model C6506).

Let's take a look at this device.
Here's the video: 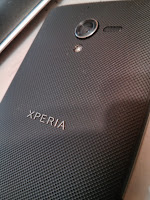 On the outisde
So going around the device we have a nice ruggedized/rubber back - really helps hold it in your hand.  All the buttons are on the left hand side, which makes taking screenshots a little awkward.

The dedicated camera button is nice to have, and it seems to work much easier now than in previous versions (trying to use it in older Xperias it would just seem to go off on its own, or never load the camera).

The front facing camera is on the bottom of the phone, so if you take selfies, you have to raise the camera a little more (or tilt)

Funny how no one is in an uproar about this not having a non-removable battery :)

Turning it on
This is where you realize what a device you have.  Full 5" display, and without any buttons on the front, it's using nearly all of it's real estate.  For feeling smaller than the Nexus 4 the display really punches out that 5" and is quite stunning.  The full 1080p is noticeable on apps that really take advantage of it (it's funny on Ingress how the boxes for buttons stay the same 'size', but the text is smaller).

Immediately I notice that the screen is overly bright.  Adjusting it doesn't make much difference.  The blacks are really 'greyed' out by the overly strong LED.  This makes the whole device have a yellow tint in my opinion. 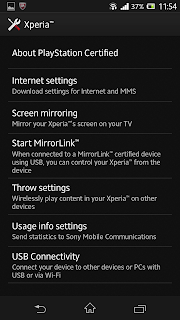 It is running 4.1.2, so it does have Google Now (with a great swipe up feature), and it 'looks like' stock.  However, it doesn't feel like it.  TimeScape UI does feel clunky and you can see the rendering -- meaning that although it's the same specs as my Nexus 4, it does feel slower.  However, running apps where TimeScape UI isn't there it handles almost the same.

Sony's Xperia / PlayStation feel is everywhere.  Walkman for the media player, Xperia Link, even using the Remote app (to set it up as a remote control with the IR blaster) is heavily skewed towards Sony products (can't blame them for that), but it does come at the cost of almost coming away from Android.  There's even a Sony Select app store.

The Widgets are nicely animated, and there's eye candy dragging them around or deleting them (animations). It's unnecessary in my opinion because it comes at the cost of some cycles making it feel slower. 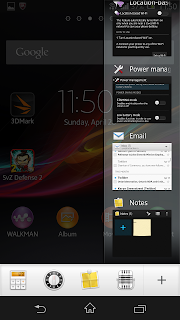 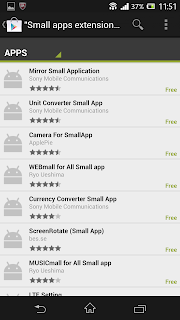 What I think is probably the coolest feature from the phone is the multitask window.  You get your list of running apps, but you also get treated to a list of 'small apps'.  I.e. apps that can run 'popped over' other apps.  And there's space for 5, as well as there's a good development community coming up with more.

Real handy way to get at some simple use tools (timers, notes to self, etc...)

The Camera
It's not bad - the Sony sensor does a good job, but with TimeScape UI for the menu it feels super slow as some options take forever to draw themselves.  Plus, I don't get how you have either 12MP at 16:9 or 9MP at 4:3... just too many options.

Also the pano sweep motion needs you to do the FULL sweep, or else your pano will have grey areas in it.  Seems like an oversight to not allow you to just pano the parts you want to.

I will say the Super AI+ mode is bang on for getting THE shot every time ... so no guesswork on your behalf.

As I said earlier the dedicated camera button does work much better in this device than I've had on others.

Samples - apparently the Minus gallery embed is a bit borked, so here's the direct link

Overall
Where TimeScape UI is... it feels clunky.  Get it into an app away from that and it's fine.  Albeit it comparing it next to the Nexus 4 it does feel slower.

Having the IR blaster is great, but the app feels old and looks like it would be quite laborious to set up (I gave up after a while of trying for my device), so it's a novel feature, but I doubt I'd actually use it myself.

I don't find that much of an issue with battery life.  It wasn't my daily driver, so it wouldn't get 'usage' tests, but when I would use apps that are battery intensive, it was about the same drop as in other devices

Final Comment
And the underlying love here tho' is that it's nice to see that Android can come in different flavours.  There's no 'one size fits all' theory here.  You can find the device that suits you.  If you're a Sony guy with a Play Station and a Bravia TV, this is for you.  It meshes nicely.  Any other device you would have to fit that round peg into the square hole.  Whereas this has it's own niche.

Putting it against others for that price point right now is not going to help move devices, they'll have to drop it to a freebie to get non-Sony users to try it out.
Review sony xperia zl