The Pixel 2 (and the XL variant) are now up on the Google Store for your preorder.

But let's compare, which is the one you'd choose?

Let's see them side by side:


So, I personally know I'd go for the the XL.  Getting a 2:1 screen has been awesome and would be hard to go back.

Else, they're pretty much the same.  No extra features from one or the other.  Just the question of do you want a bigger, or littler, screen?

And what does the new NexPixel offer?

From the launch, one of the major features we find out about this is that it's got Assistant built in.

Not anything new, but the AI is getting better all the time. 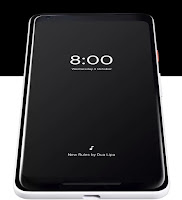 One of the new features it allows is an Always On display that actually will have the 'now playing' of whatever song it hears showing on the lock screen.

Apparently, it does this via on-device machine learning so nothing gets sent to Google (but what if it's a song that's not currently in your list?).  That would be pretty handy to have.  Tapping that spot on the lock screen will bring up the Assistant for more information about that song.

And accessing the AI is easier now with the 'squeeze' option from HTC, where you just squeeze the phone and your Assistant comes to life.

The power button is now a differently accented colour.

Personally, I think it's because the volume is now a rocker, and is about the same size... it's to help differentiate.

Added features currently for the device is that it is the only one with Google Lens (the Google Goggles feature on steroids), and able to use their new AR stickers for your camera app.

Speaking of their camera app... last year the Pixel got a DXO score of 89, the highest any phone had ever got before.  This year now has a 98.  Whooo

The camera also has some 'motion photos' option for you to take 6s little 'gifs' and it's doing some learning as well about what's in the background to make it look as smooth as possible.

As in the previous model, if you shell out for the Google devices, you'll get unlimited Google Photos storage for any resolution for photos and videos shot with it (there is an end date on it tho').

Pricey devices, but they're really looking to pack a big whollop performance wise.  The unlimited Photos option could even be worth it alone.

Now, if you want to preorder, you may have to wait.


Remember, if you want to compare the Pixel against any of the other flagships out there, check out: http://databases.androidcoliseum.com
Google Pixel 2 Pixel 2 XL