Posted by Ryan Moore on August 01, 2017
If you have a streaming box, you'll need to replace that remote it comes with.  It does an okay job, but typing out search terms, or even just trying to use a pointer is painful.

I've reviewed another keyboard before, and at first, I was preferring that to the one I have now, the S77 Pro from EntertainmentBox.  But after a few days, I prefer this now, hands down.  Now, it may look familiar - Martin had reviewed almost the exact same product from Rii before.  But, let me give you my take and on why it's my new pick. 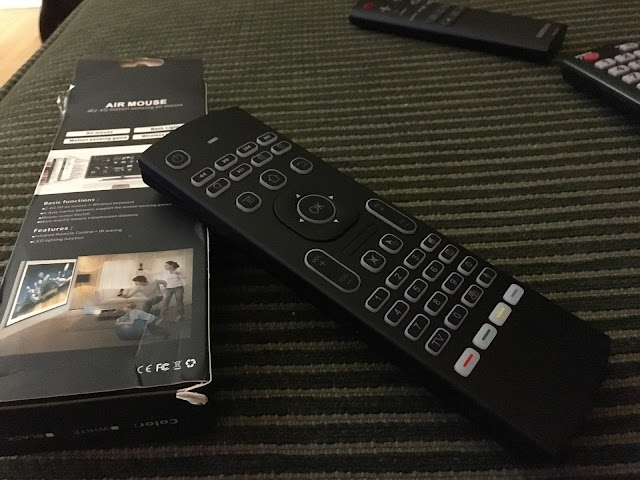 Now, it's not as cheap as some of the keypads you'll see, this runs at ~$22USD, but it's worth it in a couple of ways:

So, first up, let's tackle how it handles interacting with your box.  It's neat in the way that one side is your standard 'remote' and then you flip it over for the keyboard. 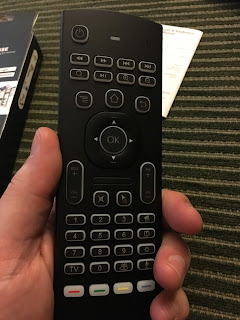 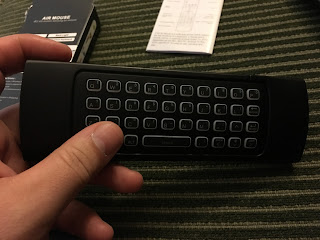 The arrow keys are nice and prominent, and that's often how I'll use the navigating of the launcher/apps.

Okay, that's all good, but how about using it as a mouse?  Now, it has a 3 axis gyroscope in it, so that you can tilt and pan your remote, much like you would a Wiimote.  Now, you don't use the mouse in that way too often, depending on your launcher and apps you're using, but when you do, it's very VERY handy to be able to use it this way versus a trackpad.  It's not as intuitive at first, but it doesn't take too long to get the hang of it.  To activate the gyroscope there's a little 'mouse pointer' button just below and right of centre.  Hit it and the pointer appears on the screen, tilt away to move the pointer and 'ok' to select.

Outside of that, hit the button again and you use the arrow keys to navigate through the options.

The back is a keypad so that you don't have to bring up a virtual keyboard and take forever to type out "cbc dragon's den".  That would take forever.  And like I mentioned, it's backlit, so you can see what letters (or buttons on the other side) you're going to hit.  It's not super bright, but it'll manage.

It handles typing at a moderate speed, so don't go too fast, especially depending on the box you use (I'm currently recommending the T8V). 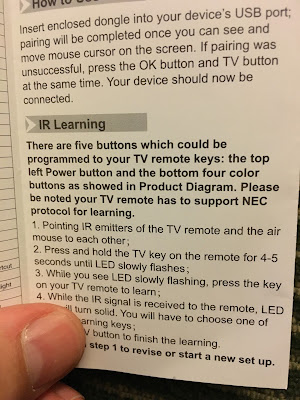 Now where it really earns it's price is the fact that it has IR learning.

This means that there are some extra buttons on the bottom on the remote that you can program to do something else.

Follow the instructions on how to put the remote head to head with it and learn and it's awesome.  It's pretty easy too.


For me, I use the 1st button to turn the TV on for power.  The 2nd is the source selector for the TV.  I would think most people are going to do that.

I haven't really decided on the last 2 yet.  Thinking of using volume up/down from the sound bar remote.  We'll see.

Overall, it's a great (if not a must) replacement for the streaming box's remote.

Add in that it's all wireless, that you can point it in any direction... I can't go back to IR these days.  Getting spoiled.

If you've entered our contest and win the box, or just want to buy one, this is definitely $22USD well spent.