[Review] Samsung Galaxy Xcover 4 - something for your workers

Posted by Ryan Moore on July 07, 2017
So, there once was a time when I worked in cellular retail, specifically in the technical support and repair area.  It was fun, but I definitely would not want to go back there.

One of the interesting things about working there was seeing not just your everyday cellular user, but those that had to use the phones for their line of work.  Often these were line workers or construction guys.  Now, I remembered how many of those Otterboxes we sold, but sometimes that's enough.  No matter what you do the phone you had was going to get some abuse.  Wet, falling etc...

There was this Samsung Galaxy Rugby that folks trusted a lot.  And I saw that thing come in more times than I can count.  Those guys that bought jit just put it through some real tough paces.  How many I had seen come through that were driven over, dropped into cement or other liquids and whatnot was pretty hilarious.

Well, now there's the Galaxy Xcover 4, which is sort of the new line for the Rugby series.  At $325 it's in the realm that if it receives more abuse than it can be dealt, then it's not so expensive to replace. 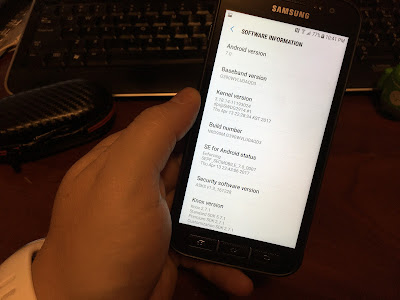 So, let's get tihs straight off the top.  At $325 it's not going to be a flagship device.  What do you get with it then?


Yeah, 1.4GHz quad core.  Sure it's the Exynos processor, but it's still pretty small compared to even the economy line devices out there these days.

As I said this will be perfect for those that need to ring in with the boss, take a picture of a crack int he pipe, throw it back in the carhart poveralls and get back to the truck.  Not a lot of playing games, updating Facebook etc...

I was surprised by the camera actually, f/1.9 does give it a bit of an edge to take photos in more dimly lit areas. 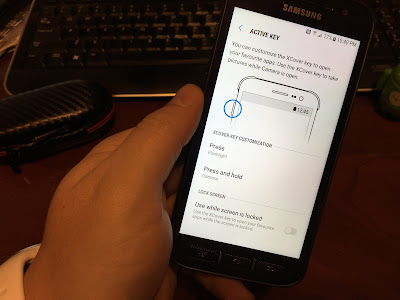 Speaking of being in dimly lit areas, it has a 'convenience button' which you can hit once to bring up the flashlight, or double tap it to bring up the camera.  Really tells you who this is aimed at - those who need to use this like a tool!


Following in line with it's use as a 'tool' to be able to interact the device when you may have gloves on, it sesphysical navigation buttons rather than softbuttons or software buttons.  I'm not a fan, but I can see how it would be useful for those that needed  it.  Sure there's 'glove mode' for the touch screen, but that usually doesn't translate to the soft buttons on the edges, so a button makes sense.

The bits I got to use it, I was skeptical about how it would handle, and it did okay.  Then again I didn't load it down like I normally do with several email accounts and social media, etc... becuase chances most of the workers who'd have one wouldn't be allowed by their boss, and the boss would appreciate that if they did anyways it might be pretty slow enough for them to not bother.  Lots of the people that had the Rugby when I knew them had 2 phones, one for the warehouse, while their own was left in the locker.

Is this a phone for you?  I dunno... do you like to use a phone like a mini computer?  If so, then no.  If you use a phone like it's a tool, something to do a simple job, then it is.  It's rugged enough to be treated not as carefully and cheap enough that if it were to suffer something heavier that it's not going to break the bank.