Posted by Ryan Moore on January 17, 2017
Over the holidays my wife and I were looking for a replacement TV stand for the basement, and in our search decided we should get one with a fake fireplace to keep the chill out of the basement while watching movies.

Let me tell you, I hate shopping.  She had picked out from a few for me to have my input on, which was most appreciated and then I looked them few over.  One stood out to me, because it had bluetooth, and an app.  When picking between something without phone integration and something with... I always choose with.

It was the Surrey Electric Media Fireplace 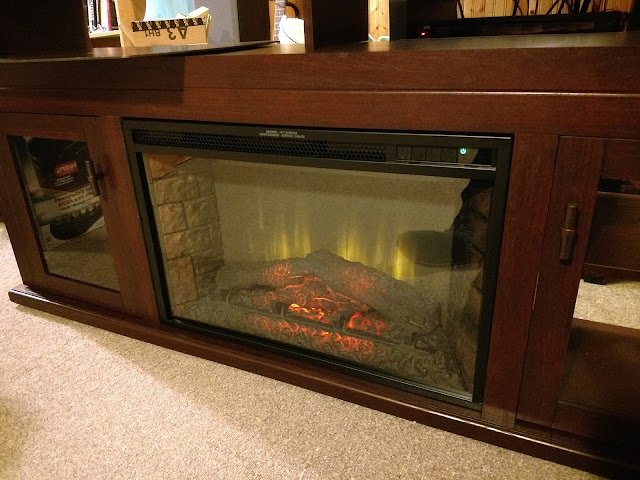 So we got it (and on sale), it was a huge box and took me a while to get into the house.  My father-in-law came over and we had an evening of putting it together.  Wasn't too hard and in no time it was all set up.

I'm not going to go into how the device works, rather I thought I'd chat about how the app is.

We almost didn't buy it,  My wife upon hearing it had an app looked it up and saw that it had a very low rating on the Play Store.  I was concerned, but still, I'd rather still have the option.

Loading it up at first was painful, but don't fret, since they've updated everything works pretty fluidly now.  I held off on writing a review until they let out the update.

Before it was sort of 'iffy' if you actually were connected with the fireplace and whether or not it would turn on or off, and none of the settings worked at all.

Now, it connects, and it'll give you a blue dot to say it's connected to the fireplace.  It's a little dicey that it doesn't get you to pair with the unit.  So anybody with a phone who comes into the house could put the app on their phone and connect to it.  Chances are slim, but still there. 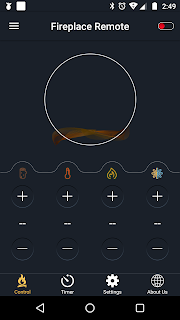 Once connected you can control all the settings you could with the remote it came with or by touching the buttons on the front (like a savage).  The app is way easier.  And what's nice is that I've been able to make sure it's turned off even when I'm upstairs.

So, the settings are adjusting the temperature (set it to °F or °C).  What's nice is that it has a thermostat built in, so that as soon as it reaches said temperature around it, then it turns off the fan, and will resume if it gets too cold (so it's not always blasting hot air constantly, running up your hydro bill).

There's also setting for the intensity of lights on the log, the flames and then adjusting the flame colours. 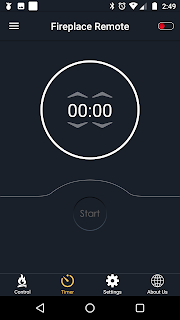 My favourite setting is going into the timer.

I know I'm forgetful, so it's nice to be able to get downstairs and just set the timer for 2 or 3 hours (depending on what I'm doing) and knowing it'll just shut off.  The shutting off also acts as a reminder for me to go to bed.

Just set it, and forget it.