Posted by Ryan Moore on September 01, 2016
Yesterday, Lenovo showed off their latest addition to the Moto Z family, the Moto Z Play, which is the slightly less spec'd version of the Moto Z.  They also announced a new Moto Mod (which will work with both Z devices - the Hasselblad TrueZoom mod.

Okay, so let's look at the phone first.  As with similar other 'normal' to 'Play' models the Play name means it sacrifices some specs for a bigger battery, so you can 'play' longer with it. 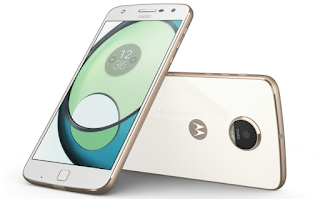 Here's how they stack up to each other:


Both are using the new USB-C connection, but the Z Play, with the bump in the battery allowed itself to squeeze in a headphone jack.

You may say "hey, the camera is better on the Play", but look at the actual specs of the sensor, the smaller MP for the Z is true, but it's a wider aperture (better for low light) and larger pixels (even better for low light), the same is there on the front camera as well.  Still, I think most won't notice too much of a difference.

We're still waiting to hear price for the Moto Z will launch for $900 outright, and the Play version is going to be $650 outright and available on Rogers, Telus and Koodo by the end of the month.

Both will be able to take advantage of the mods Moto is letting out. 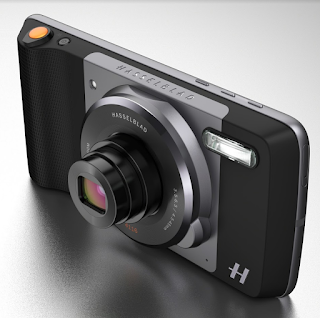 Which is the second announcement, the new Hasselblad True Zoom.

This is like taking the Cam Plus mod from the G5 and giving it steroids.  It transforms the whole back into a camera.  And not just any camera... a Hasselblad.  Having grown up around a few professional photographers, you learn to revere certain names, and Hasselblad made a wicked medium format lineup.

The camera weighs in at technically only 12MP, but like I was talking about above, there's more to it than just the number of pixels.  Each pixel is 1.55um, and the CMOS sensor is 1/2.3" making sure that appropriate amounts of light enter the frame.

Sound neat?  I think so... I can think of a few photogs I know of that will turn heads if I had this.

With Moto Mods, we’ve entered the next era of mobile technology. When you can transform your smartphone into exactly what you need it to be, the possibilities are endless.

Our Moto Mods family already includes the JBL SoundBoost speaker so you can take the party with you, the Insta-Share Projector so you can share content as you want, and power packs from Incipio so you’re never without battery when you need it most.

But that was just the beginning.

We know mobile photography is important to all consumers. Moments captured on-the-go are some of our most precious memories. That’s why we’re taking the smartphone camera experience to the next level with the Hasselblad True Zoom Moto Mod. Our collaboration with legendary photography brand Hasselblad makes advanced imaging experiences like 10x optical zoom and shooting RAW a reality on mobile.

We’re also introducing a new member to the Moto Z family - Moto Z Play. It comes with our longest-lasting battery ever and is designed for Moto Mods, giving you even more choice to find a phone that best fits your needs, with the technology that matters most to you.

Featuring a thin, lightweight design with a solid aluminum frame and elegant glass back, Moto Z Play packs up to 45 hours of battery life* with Moto’s longest-lasting battery ever, allowing you to play for days without stopping to recharge. Burn through your 45 hours? No problem - power up fast with TurboPower charging: up to 9 hours in just 15 minutes.**

Moto Z Play also offers an ultra-smooth 2.0 GHz octa-core processor, a stunning 5.5” 1080p HD Super AMOLED display and 3GB RAM of memory so you can play games, stream video and multitask without missing a beat. Shoot beautifully sharp photos - day or night - with a 16MP laser autofocus camera, and go from selfies to groupies instantly with the wide-angle, front-facing camera with LED flash.

Hasselblad and Moto have teamed up to design an imaging experience that completely transforms mobile photography. Since 1941, Hasselblad has been at the forefront of the imaging industry. Around the world, the name Hasselblad is synonymous with the finest camera equipment ever made. Some of the most iconic images in history have been taken with Hasselblad cameras, from the first images on the moon to The Beatles famous Abbey Road Cover. This year, Hasselblad is bringing their unique, iconic design and imaging experience to the mobile space.

Add advanced imaging capabilities to your phone in a snap! You can create and share like never before. Featuring 10x Optical Zoom and a Xenon flash, you just focus on getting the shot - lighting and distance will never stand in the way of capturing the perfect image.

Expect even more control and flexibility with the ability to shoot in RAW format. Plus, physical shutter and zoom controls, guaranteeing a great handling experience. Added bonus? You’ll also get free access to Hasselblad’s Phocus software for streamlined editing control and the highest quality output.

Last, but not least, share your beautiful results with family and friends while still in the moment with automatic backup and unlimited free storage with Google Photos for two years.