Posted by Ryan Moore on November 12, 2015
When I first started to really play around with phones and get serious about them as a real 'investment' ... I knew I would hate cases.  But I wanted to protect the phone, so I would look at screen protectors (nothing worse than being seeing a scratch on a device).

But putting a screen protector on a phone is quite the hassle and headache.  I used to just pay extra to have one of the store folks do it for me.  Then I'd do research and look up methods on how to do it best.

The best advice I got was from +Tom Gray when he'd suggest, just buy in bulk the cheaper ones, because then you could screw it up a few times.

Still... that was a hassle.

Then this came across my desk to review. 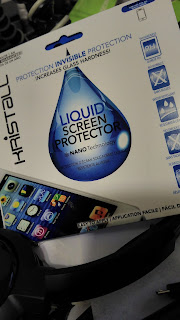 The idea here is that it's a liquid you rub onto the glass of your device and ... and then the liquid forms a bond on top of the glass, which, when cured, will provide it with some amazing protection:

I was somewhat ... skeptical, but I gave it a try, because if it did... it would super preferable than having to fudge with those little pieces of plastic or glass we put on the phones.

I watched the video probably a dozen times before I set out to try it... and little did I realize, I didn't need to.  Really the 6 simple steps on the back of the package couldn't be any clearer.

Here's my try on the ZTE Axon:

So yeah, it works.  Now... I haven't put the phone through a lot of paces (or dropped it on some cement like in the installation video - see the end of this article); but I did, as you can see in my video, take a pin to it and try to scratch it up and nothing.  I'm not quite as brave to dump water on it to see how it beads off...

Overall, I'm thoroughly impressed.  For $25 you can buy the single use swab as I used or for about $40 you can buy a tablet sized swab - which if you think about it should be good for 2 devices (so a savings of $10 if you go that route.


Kristall - Throw Away Your Old School Screen Protector from Kristall Official on Vimeo.