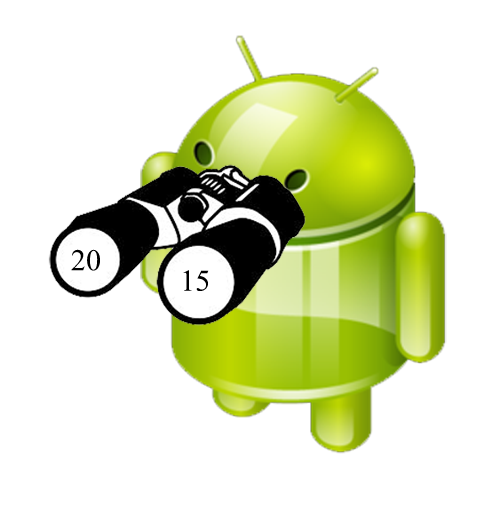 Often this is the time of the year that we sit at the dawn of a new year and have reflected on what has happened over the past year.  I know I'll be sitting down in the next while and looking at our blog and try to figure out what went well and what didn't as we plan for 2015.

In the same vein I like to look back at 2014 of Android and review what's happened to our happy little droid.  But what does 2015 have in store?

Every year I sit down and make my predictions, and I don't do so well... so like last year I'm going to 'caveat' this prediction as my own hopes.. peppered in with some evidence where I can.

With more and more devices starting to really tout their battery size and really show off how long they'll last (a year or 2 ago you rarely heard the battery size clearly stated in the specs), it's clear that this technology is something that will continue to advance.  Whether it's the new Qualcomm, or Tegra chips that will use even less juice, or just the cells themselves getting better at storing more in less size; it's clear that the discussion over 'how long does your battery last' will become a thing of the past.

Sure, there are guys like Martin who can show you tips and tricks to make your device last over 12 hours easily... but for the common user, that's not really something they'll be doing.

...be in more devices than just phones/tablets.

With the launch of Android Wear this past year, the further growth of the Chromecast, Nexus Player, the little heard of Android Auto... it's clear that Android is reaching into more devices.  I've even seen that some POS terminals now come with it (something that I'm kind of pushing my group of entrepreneurs to use as a nice cheaper alternative).  It's clear that in 2015 we'll see Android will showcase how we can 'be together, not the same'.

...have a hard time differentiating the various devices based on specs.

There's just too much advancing so fast that I'm starting to believe that the 'spec wars' are over.  Nobody really pays too much attention to things like the processor speed - performance on just about any device is good.  What will differentiate each of the devices will be the features that each OEM can bring to the table (like their own personal skin).  So this year you'll see newer features pop up, or ones we've already had, but weren't really announced come to the forefront of advertising.

...push hard on the Google Wallet into Canada.

That's my personal hope.  With Apple ready to bust heads to get their wallet into Canadian retailers, despite the fight that some of the big retailers have had against Apple.  I think this is one instance where as much as Google has come up with it first, Apple will try to claim it as their own (we know that happens all the time), but Google will quietly just slip in with the success regardless.  When Apple has the door open there shouldn't be anything that'll block Google's Wallet also (then again, getting iTunes didn't exactly allow GPM).

...be ever more indistinguishable from ChromeOS.

Again, we see further and further Google's push for Chromebooks and how Android is integrated with (you can run apps on your chromebooks, and some extensions now run on Android).  I think in 2015 we'll see a continuation of that line blurring.

We've seen some slow down on Samsung's part, hopefully it'll be picked up by other OEMs like Sony (I really think we'll see more from them this year).  I think Windows Phone and other emerging devices might start to come and take their share; and if Apple Pay becomes dominant then we might see a few of the non-committed users switch to iOS to use that feature.

I don't see Android's slowing growth as a problem, as essentially it's hitting that market saturation point anyways, and from here on out we should see even further maturation of the product.
So, those are some of my hopes and predictions for the next year... what are yours?
predictions