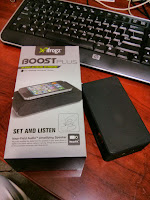 I like to use my phone, and one of the best accessories that it replaces is my old Zune.  I hated having multiple devices that do the same thing.  I love using my phone as an MP3 player.  With the right set of headphones I can just 'tune out' everything else and be immersed.

But not always am I listening to music for just myself.  Sometimes it'll be at the camp (cottage for those of you who aren't up on the NWO lingo), or on a bit of a road trip and in the hotel room we'll want some tunes.

There's a million and one speaker systems out there, and 99% of them are specifically for iOS devices.  So it's rare to find one that's universal.  The Boost Plus by ifrogz is one of those examples that's universal; but what really sets it apart is how it makes itself universal.  And no, it's not NFC like the Sony speakers that Mark reviewed. 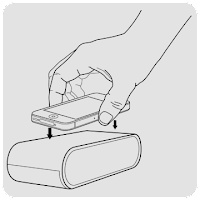 Sure, you could use 1/8" stereo jacks, or even BT.  But this is unique.  It's got something called NearFA technology.  Essentially an induction coil that senses the magnet of loudspeaker of something nearby, say your cellphone and then uses that signal and passes it out to it's own speakers.  I've even tried it with headphones (albeit it works very quietly).  Just watch the video for a demonstration.

Powered by 3xAA batteries it outputs only 2Wx2.  This year's model is slightly larger as now it has all the speakers facing one way (last year's it fired out on either side of the box).

There's also the option for microUSB for power (but I find it just slightly quieter than good AA batteries) and a 1/8" stereo jack connection (which I don't find there's much better connection than the nearFA... only really good if you want to be able to use the device in your hand while it's playing music over the box). 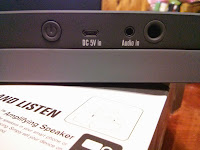 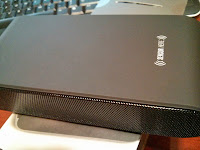 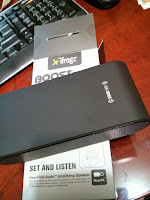 Another improvement over last year's is the indicator for the sensor.  It's also more sensitive as there's no fading in or out as you fiddle with the position (there was a very small 'sweet spot' last year, this year it seems to be a wide range).  You can also get the top in various colours.

For $60 it can be a little pricey in some views, but I literally take it on every trip I go on and it's used every time.  Also, it's cool to watch someone who's never seen it before watch it work.